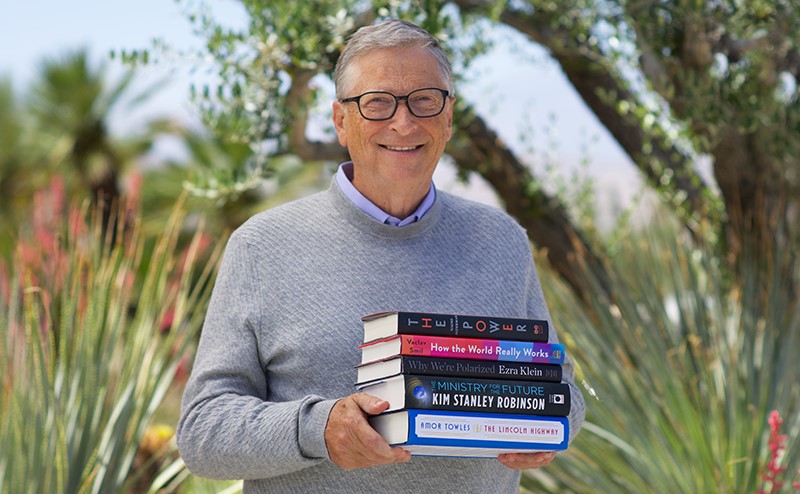 The books cover gender equality, polarization, climate change and science. And, Gates believes these are “pretty heavy for vacation reading”

It is the time of the year again, at least for Bill Gates.

That means he shares his 5 book recommendations for this summer. Probably you’re aware of that Bill Gates often expresses his opinions on books in his gatesnotes.com blog. As you click “books” section of the blog, you’ll come across many books ranging from novels to science books.

Now, let’s check Bill Gates’s 5 books for the summer 2022. The authors of the books are three novelists, a journalist and a scientist by profession. And the themes of those books focus of gender equality, polarization, climate change and science.  By the way Gates believes these are “pretty heavy for vacation reading”, adding that didn’t sound something like to read on the beach.

Now is the time to dive into those books:

The Power (Naomi Alderman): Alderman’s novel centered upon gender equality and “…our era’s Handmaid’s Tale,” a fierce new power has emerged—and only women have it” for Washington Post. Reading the novel, Bill Gates gained an insight on abuse injustice women have experiencing: “And I expanded my appreciation for the people who work on these issues in the U.S. and around the world.” Gates added that his older daughter recommended The Power and he was happy to follow the suggestion.

Why We’re Polarized (Ezra Klein)   Ezra Klein’s book a New York Times and Wall Street Journal bestseller and digging how America’s political system is damaged. “In this insightful book, Klein argues persuasively that the cause of this split is identity—the human instinct to let our group identities guide our decision making,” writes Bill Gates.

The Lincoln Highway (Amor Towles)   The novel takes place in 1954 and reveals the story of the brothers who are driving from Nebraska to California. The aim of the boys is simple: to find their mothers, but “their trip is thrown way off-course by a volatile teenager from the older brother’s past,” notes Bill Gates. He underlines that our personal journeys are not as foreseeable as we expected.

The Ministry for the Future (Kim Stanley Robinson)   Kim Stanley Robinson’s novel is dealing with climate change, a favorite subject of Bill Gates. “The Ministry for the Future is a masterpiece of the imagination, using fictional eyewitness accounts to tell the story of how climate change will affect us all,” explains the note at Amazon.com. On the other hand, Gates said he was happy to choose the book as a part of his efforts in promoting climate change and Robinson “presents a stimulating and engaging story, spanning decades and continents, packed with fascinating ideas and people,” added Gates.

How the World Really Works (Vaclav Smil)  Vaclav Smil is one of the most favorite of Bill Gates and you can see other books of him at gatesnotes.com, such as  Growth and Energy and Civilization. Gates notes if you want a brief but extensive training about numeric thinking about many of the substantial forces that shape human life, this is the book to read. “…This book explains seven of the most fundamental realities governing our survival and prosperity. From energy and food production, through our material world and its globalization, to risks, our environment and its future,” emphasized the note at Amazon.com.

By the way I’m also writing about books and films. You can see some of them below: